The Lambent coaching methodology is currently being used in over one hundred trainings a year in over thirty countries.

It has been used to train over 15.000 people from 78 countries since 2001. It is structured and delivered using principles of Andragogy (Adult learning principles) that engage, motivate and efficiently pass knowledge and skills to adult learners.

The Lambent International Coaching Certification Training certified by the ICC at their level one, has been independently evaluated according to University Standards. It has been awarded a European Quality Award (EQA) in 2010 by the European Mentoring and Coaching Council (EMCC). It therefore also meets the requirements of the International Coach Federation (ICF) ACC Portfolio path.

The structure and content of the Lambent course is designed to give the students knowledge, skill and self development. It is applicable to business people at every level.

The method is an integrated framework from the following main coaching models:

The Lambent coaching methodology is international. It is used exclusively by the International Coaching Community (ICC). ICC is one of the largest professional membership organisations for coaches in the world. It was established in 2001 and is a Not for Profit company registered in London UK. It has trained over 15,000 coaches from 78 countries since 2001 using the Lambent methodology. There are currently 46 trainers worldwide training with this methodology.

The methodology follows the three foundational knowledge traditions of coaching.

a) Humanistic psychology and the works of Abram Maslow and Carl Rogers.
The main principles of Humanistic Psychology are:
— People have a valid experience of their own values and goals.
— People want to be the best they can be.
— Everyone is unique and valuable.
— Everyone wants to have a choice and to exercise choice.

These are basic principles of all schools of coaching.

b) Constructivism
This viewpoint comes from Cybernetics and the works of Heinz von Foerster.
Constructivism developed the idea that we help create the world we live in. Our perception of reality is as much a construct of our minds as what is in the world outside us. Therefore coaching needs to discover the world the client is constructing and not try to give them a right answer.

c) Linguistics
People describe the world and themselves in language, and the structure of language shapes their thinking and limits it.
Coaching takes into account how the language the client uses is a clue to how they are thinking about their issue.
The Lambent methodology is an integrated model, based on sound theoretical foundations and developed from many further lines of thinking:

Lambent methodology also follows the principles of Evidence based coaching, defined as: ‘Intelligent and conscientious use of best current knowledge integrated with practitioner expertise in making decisions about how to deliver coaching to individual coaching clients and in designing and teaching coach training programs.’

The designers of Lambent methodology, Andrea Lages and Joseph O’Connor have written two books on Coaching. Their second book, ‘How Coaching Works’, was nominated for the Financial Times Best Business Book of the Year in 2007.

The structure of the Lambent coaching course and the way it is trained follows these important principles. All our trainers are highly experienced and trained specifically in the Lambent methodology and approach.

Executive coaching is a very important application of coaching. Coaching executives to make better decisions, work better with teams and clarify their goals and values, is an enormous help and can have great impact on themselves, their team and the business. This impact can be measured financially. The focus on coaching executives is to develop their authentic leadership so they can be their best, and develop other leaders in the organisation. There is a balance between the business approach where coaching objectives need to be aligned with organisational and business goals, and coaching the executive as a unique individual, respecting his or her strengths and developing his or her potential. The Lambent methodology is well developed to do this in an efficient and effective way. 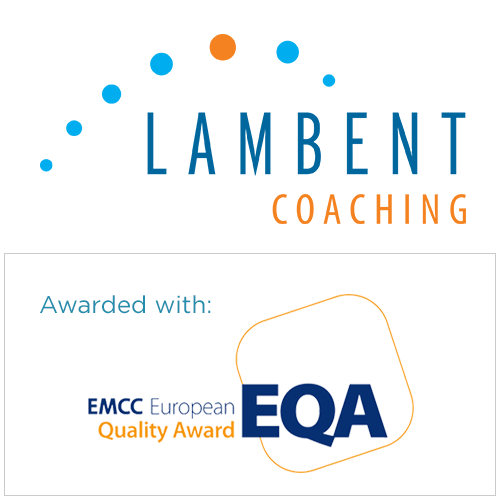 The International Coaching Community uses the training programs and methodology created by Lambent. The Lambent coaching methodology was awarded with the European Quality Award (EQA) in 2010 by the European Mentoring & Coaching Council (EMCC), and has been used to train over 15,000 people from 78 countries since 2001.